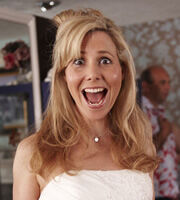 Matilda "Tilly" [Charlie's lastname] is an old boarding school friend of Miranda. Miranda mentioned that Tilly said that when you're put in a boarding school dorm together age 9, you're bonded for life.

Tilly was born in Great Britain. She attended boarding school at age 8, with Miranda, Gary (met at around third secondary stage), Stevie (met in secondary stage), and Fanny. She shared a dormitory with Fanny and Miranda when they were 9. She is quite attached to her smartphone and texting.

Despite her appearance going generally unmentioned, Tilly has long honey hair and dark brown eyes. She often wears trendy, fashionable clothing and is regularly viewed as wearing different types of dresses. Even when in dimly lit locations such as the club where Miranda met Michael, she was seen as wearing dark glasses.

Tilly is an in-your-face character who has a bizarre way of speaking. She has a habit of combining words in order to make new ones. This sometimes confuses the others. Moreover, Tilly frustrates the others by continually saying "bear with" when texting on her phone, expecting everyone to wait for her, before returning it to her bag.

Throughout the program Tilly is known to have a wide range of Phrases, in which she converts normal English language into a more complicated, posh fashion.  Here are some of them and their translations:

Community content is available under CC-BY-SA unless otherwise noted.
Advertisement