Date is the first episode of the first season and thereby the series premiere of the BBC's Miranda. It was broadcast on BBC One on 9th November 2009.

Miranda is not a girly woman. She's 6 feet tall and is called "Sir" a bit too often. Her mother tries to find the right man for her, but Miranda isn't interested in love. That is until she walks into her childhood friend Gary, who now works as a chef in the café in the same street as her Joke Shop. When Gary asks Miranda for a catch-up drink, is it finally time for Miranda to be "Lucks Ville in love"?

Miranda is sitting in her flat and tells the audience that previously in her life, her mother has been trying to find her a husband, she has also opened a shop, hiring her best friend Stevie to manage it and that her friend Gary is back from his travels.

Miranda enters the shop from the stairs, trying to excuse excuse herself for being late even though she lives in the flat above the shop. Stevie tells her it's delivery day and hands over a chocolate willy to Miranda. Miranda suggests that they're almost like the real thing although Stevie doesn't believe so, leaving Miranda feeling a bit of an idiot. She tells Stevie that she will be having lunch with "the girls", when two delivery guys walks in. One of them asks Miranda to sign while the other drops off boxes and calls her "sir" in the process, this annoying Miranda as the delivery man still thought it to be correct even when he looked at her.

Penny walks in and mentions that Miranda's cousin is still available, leaving Miranda to once again declare that she won't marry her cousin. Penny leaves and when Stevie opens the boxes, she finds them to be filled with baby toys and clothes. After attempting to be feminine, Miranda leaves for her lunch with the girls.

After Gary goes back to the kitchen, Miranda moves to the girls, who are sitting at a table in the restaurant. Tilly and Fanny call her "Queen Kong" and show her their engagement rings. They tell her that they are going to shop for wedding dresses tomorrow afternoon and ask Miranda to come with them. Gary comes to their table to take their orders.

Miranda walks into the shop and tells Stevie that Gary works next door and tells her about her attempts at impressing him. Stevie is on the phone, trying to call the company that has delivered the baby stuff but she's been waiting on hold for an half an hour, forcing to listen to awful music. They are having fun in the shop when Gary enters. He looks around and Miranda end up lying about a family that does not exist, but he knows that she is lying because she is nervous. He then asks if she wants to come the restaurant later to catch up.

Miranda enters her flat and wonders what she would do if she had her own Trinny and Susannah-esque show.

Then, while attempting to leave, Stevie insists she "tidy tidies". Penny enters and asks if Miranda knows what she should buy for an upcoming baby shower. After Penny leaves, Miranda puts the boxes in Stevie's "personal space" and runs out.

She enters a shop, not knowing that it's a shop for transvestites. The shop owner tells her that she has a fine figure and that he knows exactly what to do.

Miranda enters the shop in a ridiculous outfit. A customer tells her she could definetly 'pass' and he leaves, leaving her unsure as to what he means. Stevie sees her and immediately reacts by laughing and at that point, Gary walks in. Miranda decides to go upstairs to change when Stevie discovers Miranda has put the boxes in her personal space, leaving Miranda to clear up her attire and the euphamism to Gary before tripping her way up the stairs.

After having a chat at the restaurant, they walk into the shop and go upstairs to her flat, talking about how they don't undertand why people want children straight away. When she opens the door, she says she has a fairly normal interest in children. They enter and see her flat is filled with baby stuff. Gary says it's late and hastily retreats.

The next day, Miranda tells Stevie that Gary came back to her flat but Stevie blames her for putting the stuff in her personal space, this being a reason for why she moved it to her flat. Penny walks again and tells about the gift she bought for the baby shower. It turned out to be a battery operated rabbit sex toy. She tells that the baby loved it.

Later that day, Miranda is reading the menu at the restaurant when she starts a conversation with Gary to try to explain the mishap. He apologises to her for not giving the opportunity to explain and gives her the benefit of the doubt. She then leaves to see "the girls" for the shopping. 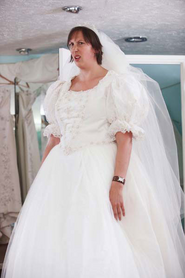 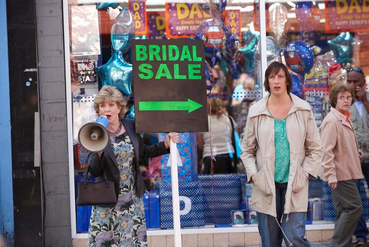 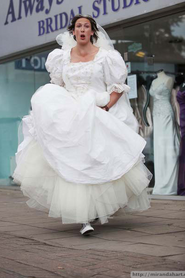 Miranda: And I said "Good morning, Mum. How are you?"
Penny: Don't get emotional, we're not Spanish.

Miranda: Morning, Stevie.
Stevie: Afternoon, more like. It's nearly lunch time.
Miranda: Oh, the trains were a nightmare. It's a hellish journey.
Stevie: You live upstairs.
Miranda: There were leaves on the carpet. Oh come on- that was a good one!

Miranda: Gary Preston is back from his travels. He's lovely. But I always make a cock-up if I see him. Well there is never any cock-up involved if you see what I mean!

Man: There you go sir.
Miranda: Did he just call me sir? He just called me sir. I mean it is fine when their not really looking notice the height call me sir look up "oh sorry madam" when that happens. He looked straight at me and still thought sir was the right option.

Community content is available under CC-BY-SA unless otherwise noted.